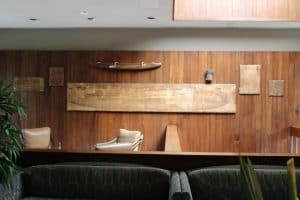 To perpetuate the original idea of the Outrigger as a Club for canoeists and surfers, sculptor Edward M. Brownlee was retained to execute this bas-relief carving of an ancient Hawaiian Canoe from drawings in the Bishop Museum Archives. The carving was completed in 1964 in time for the opening of the new Outrigger Canoe Club at Diamond Head. It hangs on the Northwest wall of the Lobby.  The large carving shows the entire canoe. Each of the small carvings show a part of the canoe. A koa canoe hangs above the carvings.

Edward Malcolm “Mick” Brownlee was a prominent sculptor in Hawai’i and the Pacific Rim.  Born in Portland April 23, 1929, he served as an Army cartographer in Japan after World War II, before attending Oregon State University and the California College of Arts and Crafts. He received a master’s in fine arts from the University of Hawai’i in 1954.

Brownlee developed a unique artistic style, which was influenced in part by the art of Asia, Oceania and the Pacific Northwest. The winner of several architectural and art awards, he was one of Hawaii’s preeminent artists and his work adorns public spaces and private collections in Hawai’i, Oregon and around the Pacific Rim.  He is best known for his work in Hawaii, where he was a frequent collaborator with architect Pete Wimberly.  He is known for doing many of the carvings for Donn Beach at his restaurants and for the original International Market Place as well as at many other buildings across Hawaii.  He died in 2013. 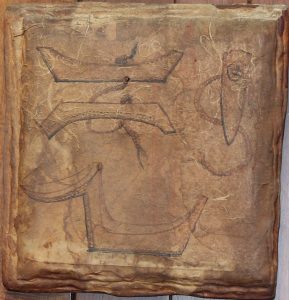 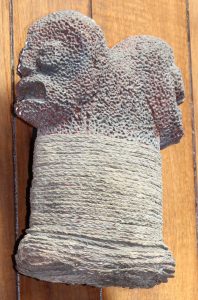