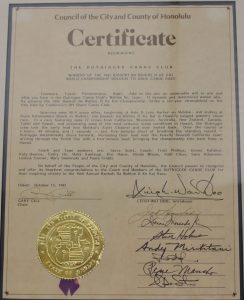 The Council of the City and County of Honolulu

“Teamwork.  Talent.  Perseverance.  Heart.  Add to the mix an undeniable will to win and what you have is the Outrigger Canoe Club’s Wahine No. team:  12 dynamic and determined women, who by winning the 1992 Bankoh Na Wahine O Ke Kai championship, broke a six-year stranglehold on the title held by California’s Off Shore Canoe Club.

Spanning some 30.8 ocean miles, beginning at Hale O Lono Harbor on Moloka`i, and ending at Duke Kahanamoku Beach in Waikiki, the Bankoh Na Wahine O Ke Kai is Hawaii’s longest distance canoe race.  In a race featuring some 27 crews from California, Wisconsin, Australia, New Zealand, Canada, Tahiti and Hawaii, and presenting some of the most arduous ocean conditions in Hawaii, the Outrigger crew took the early lead in Moloka`i’s Kaiwi Channel and never looked back.  Over the course of 5 hours, 49 minutes and 2 seconds – just five minutes short of breaking the standing record – Outrigger determinedly drove forward, increasing their lead over the heavily favored California team; driving through the finish line with a four minute lead; bringing the championship title back home to Hawaii.

On behalf of the people of the City and County of Honolulu, the Council pauses to recognize and offer its hardiest congratulations to the Coach and members of the Outrigger Canoe Club for their inspiring victory in the 14th Annual Bankoh Na Wahine O Ke Kai.”