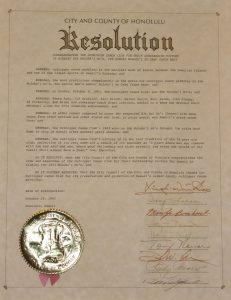 Congratulating the Outrigger Canoe Club for their Outstanding Victory in Winning the Moloka`i Ho`e, the Annual Moloka`i to Oahu Canoe Race

“Whereas, outrigger canoe paddling is the earliest mode of travel between the Hawaiian Islands and one of the oldest sports in Hawaii’s history; and

Whereas, the most prestigious championship in the world for outrigger canoe paddling is the Moloka`i Ho`e, the senior men’s annual Moloka`i to Oahu Canoe Race; and

Whereas, 40 other canoes competed to cross the respected Ala Nui Ha`a Channel with many teams from other nations and other states who have, in prior years, won Hawaii’s great canoe race; and

Whereas, the Outrigger Canoe Club’s 1983 winning the Moloka`i Ho`e brought the title back home to stay in Hawaii after several years absence; and

Whereas, the Outrigger Canoe Club’s victory is in the best tradition of the 75 year old club, reflective of its very name, and a result of its reminder as “a place where man can commune with sun and sand and sea, where good fellowship and aloha prevail, and the sports of old Hawaii shall always have a home; now, therefore

BE IT RESOLVED, that the City Council of the City and County of Honolulu congratulates the crew and steersman of the Outrigger Canoe Club for their outstanding victory for Hawaii in winning the 1983 Moloka`i Ho`e; and

BE IT FURTHER RESOLVED, that the City Council of the City and County of Honolulu thanks the Outrigger Canoe Club for its preservation and promotion of Hawaii’s oldest sport, outrigger canoe paddling.”