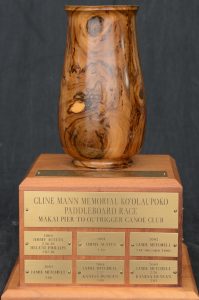 Recipient: First Male and Female to finish the race.

Turned by Kimo Austin in 2000
from a hau tree at the Outrigger Canoe Club
where Cline Mann would spend his time relaxing.

Before the death of Cline Mann in 1996, he had talked about starting a paddleboard race from Makai Pier to the OCC Beach, a course that had never been raced on paddleboards before.  On July 8, 2000 the OCC Paddleboard Committee inaugurated the first Cline Mann Memorial Ko`olaupoko Paddleboard Race, a distance of 17 miles.

The name Ko`olaupoko represents the portion of the Ko`olau range between Makapu`u and Nuuanu Pali, or the “short Ko`olau’s”.  The race was an extension of the 5,000 meter triangle normally raced in August at the Outrigger (the race was known as the Cline Mann 5K Paddleboard Race).

The trophy for the race was made from hau cut from the trunk of a tree removed from the Hau Terrace earlier in the year, and turned by Kimo Austin.  Ironically, his son Jimmy Austin is the first name to appear on the trophy as winner of the race in 2000 and 2001.  The vase sits on a wood base on which the names of all the winners are listed on plaques.  To see the list of winners click here.