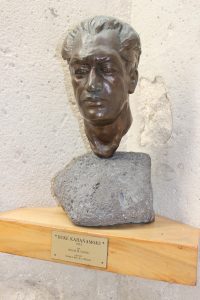 Honolulu sculptor Rosalie Young Persons donated her bronzed three dimensional portrait of Duke Kahanamoku to the Outrigger Canoe Club. The sculpture sits in the Duke Room of the Koa Lanai. The presentation was made on June 10, 1988 to members of the Club Board of Directors, Duke’s widow, Nadine Kahanamoku and invited guests.

Duke posed for the sculpture in 1934 when he was 44 years old. Mrs. Persons said Duke was a wonderful model. They had been friends for many years when she asked him to pose. The original sculpture was done in plaster. Mrs. Persons decided she wanted to donate the sculpture to the Outrigger, where Duke was so well-known and loved. She had the sculpture bronzed at Bedi-Maky in Long Island, New York.

The sculpture has been anchored on a large lava stone Mrs. Person’s father found in Waimanalo many years ago. “I felt that the stone was particularly significant,” she said. “It was full of sand and reminded me of all the time that Duke had spent in the ocean and on our beaches.”

The sculpture originally sat in a garden between the Lobby and the walkway to the Koa Lanai.  Today it is ensconced in the Duke Room of the Koa Lanai.

In accepting the sculpture, Club President Mark Buck thanked Mrs. Persons for her generosity and noted how privileged the Club was to receive such a valuable piece of art work