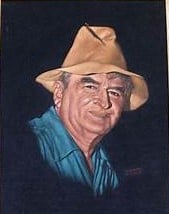 In April 1960, Outrigger Canoe Club’s favorite coach George “Dad” Center was presented with his portrait on black velvet and painted in oils by famed artist and Outrigger member Bill Erwin.  The painting was commissioned by 14 of Dad’s former swimming students.

Erwin was a noted Hawaii painter. A student of Edgar Leeteg, he worked in the master’s style.

“Dad” Center (1886-1962) was a surfer, outrigger canoeist and swimmer.  A member of the Outrigger Canoe Club since 1908, he served as Club Captain and coached the Outrigger’s legendary swim teams of the late teens and 1920s. He and a team of Hawaii swimmers took the world by storm at the 1920 Olympics where he was selected as U.S. Olympic swimming coach.  Center was inducted into the International Swimming Hall of Fame in 1991.  He is also recognized as the founder of sand volleyball, a sport which started on the Club beach in 1915 and grew to become an Olympic sport.

The painting hung in the old Outrigger Canoe Club in Waikiki until the Club moved to its Diamond Head location in 1964. In 2002, members of Erwin’s family asked where the painting was and a thorough search of the Club premises was made but the painting wasn’t found. A call out to the membership, the swimmers who commissioned it, and the Center family did not locate the portrait. 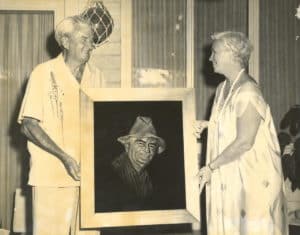 Shown presenting the painting to Dad is his protege swimmer and Olympic Champion Marichen Wehselau Jackson.

An article in the Honolulu Advertiser noted the presentation to Dad.