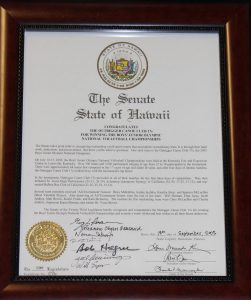 “The Senate takes great pride in recognizing youth sports teams that accomplish extraordinary feats.  It is through their hard work, dedication and perseverance that these youth achieve greatness.  One such team is the Outrigger Canoe Club Boys 17s, the 2005 Boys Junior Olympic National Champions.

On July 10-13, 2005, the Boys Junior National Volleyball Championships were held at the Kentucky Fair and Exposition Center in Louisville, Kentucky.  Over 300 teams and 1,000 participants ranging in age from 12 to 18 participated in the tournament.  There were approximately 64 teams that competed in the 17 years of age and under division, and after four days of intense matches, the Outrigger Canoe Club Boys 17s walked away with the tournament’s top honors.

The Senate of the Twenty-Third Legislature hereby recognizes and congratulates the Outrigger Canoe Club 17s for winning the Boys Junior Olympic Volleyball National Championships and extends a warm Aloha and best wishes in all their future endeavors.”