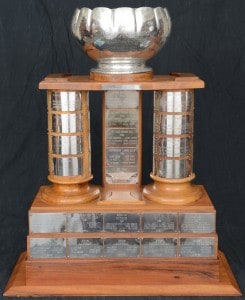 This trophy was donated by the Matson Navigation Company for the inaugural July 4 canoe races in memory of Walter J. Macfarlane, the recently deceased president of the Outrigger Canoe Club in 1943. It was awarded to the first place senior men six. The first winning crew belonged to the Outrigger Canoe Club and included Robert Bush, Tom Arnott, John Beaumont, Jim Fernie, Thad Ekstrand and was steered by Duke Kahanamoku.

The trophy is awarded annually to the winner of the Senior Men’s race. A silver bowl is attached to a koa base which bears the names of past winners.

Traditionally after the regatta the winning crew drinks a toast of champagne from the cup and invites the second place crew to join them.

The senior men’s race has ranged from 1.5 miles to 4.5 miles over the years.