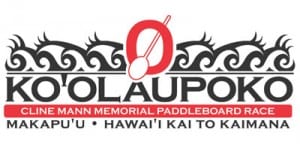 In 1985, the OCC Paddleboard Committee decided it wanted to honor Cline Mann who was responsible for restarting paddleboard racing in the islands in 1974, by naming a race for him.  They decided to take the Summer Waikiki Ocean Paddleboard race, then a 10K, name it for Cline and change the distance to a 5K race.

On August 10, 1985, 45 paddlers from all over the island competed in the first annual Cline Mann 5,000-meter Paddleboard Race to pay tribute to Cline who had contributed so much to the sport of paddleboard racing.  The race was on a triangular course which started on the beach in front of the Club.  Outside the Kapua Channel paddlers headed west toward Waikiki, turning on a buoy at the Queen Surf’s Groin, and then paddled east toward Coconut Avenue where they turned again.  The race ended on the beach at the Club.

The race was held in August every year through 1999.

In 2000, the Paddleboard Committee inaugurated the Cline Mann Memorial Ko`olaupoko Paddleboard Race from Makai Pier in Waimanalo to the Club.  The 17-mile course which had never been officially raced on paddleboards before, quickly became a warm up for the Molokai to Oahu Paddleboard Race which is usually held two weeks after the Cline.  The Cline is usually scheduled on the Saturday after the 4th of July a weekend when no canoe races are held.

Initially, the race offered Stock or Open board options.  The race could be paddled prone, either solo or as a two-person team event with the second paddler starting at Portlock Point.  In 2006, a short course (9 miles) was added from Hawaii Kai to the Club but both courses were turned into iron man events.  A Beach Boy stand up division was added in 2007 to the short course. Today the race is one of the most popular paddleboard races in the islands with both local and international competitors.

Who Was Cline Mann?