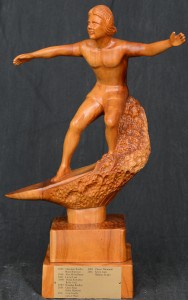 The founder of the Outrigger Canoe Club understood the importance of Hawaiian sports and games and made note that the purpose of our great Club was to preserve them for their future enjoyment. One might say that without the founders’ vision, surfing would have disappeared and never have spread around the world like it has today.

From 1950 to the late 1960’s there was no member so passionate about the development of surfing within the frame work of our founders words than John McMahon. His passion and purpose was carried on in perpetuity by his son, Jimmy McMahon, and other active surfing members.

In loving memory of the spirit of surfing our Club has the John McMahon Perpetual Junior Surfer of the Year award to recognize the accomplishments of our Junior members 10 to 18 years of age. The award was first given in 1975 to Tracy Philips as the first outstanding junior surfer.

John McMahon joined the OCC in 1953 and was a guiding light of our surfing program both at the Club and in the State of Hawaii. He was one of the original innovators and organizers of the first major surfing contest anywhere in the world, including the Makaha Surfing Classic.

He contributed a major portion of his time toward instituting an active Surfing Committee in the Club, a committee which singlehandedly kept the sport of surfing an important element of our athletic program. The Peruvian International Surfing Championships saw John carrying the banner of the OCC. There, he was a guest/judge.

His work with the Club championships in the 1950s and 1960s made the contest thrilling and smooth-running, without the usual snafus of surfing contests. A frequent winner himself through the years, he was often found in the largest waves, outsurfing and outmaneuvering younger surfers off and on the beach. It would be safe to say that without John McMahon’s concern for young people at the OCC, our surfing program would not have been what it was. He was elected to the Winged “O” in 1976.

When John passed away in 1976, the Club decided to dedicate a trophy to him to recognize the Club’s Outstanding Junior Surfer.