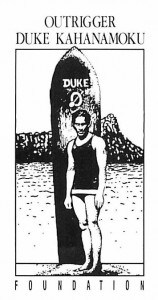 The history of the Outrigger Duke Kahanamoku Foundation goes back more than a half-century to the Outrigger Canoe Club. During the 1950s and 1960s the Outrigger Canoe Club athletic programs were growing and the Club’s balance sheet struggled to keep up with the growth and financial demands. When an athletic team qualified to compete in an off-island contest, there were very little funds available to pay for the costs, so the athletes ended up selling sweet bread and Portuguese sausage to raise money.  Club members were generous, however, the athlete ended up paying for a great deal of the costs out of their own pockets or from their parents.

In the 1970s, former Club Captain, past-President and Winged “O” Ron Sorrell was looking for a way to obtain funds for the Club’s athletic program on a tax-deductible donation basis.  Member Jeff Kissel suggested a non-profit organization and wrote the original charter, and another member Dennis O’Connor filed it with the State regulatory office, using the name Ka Aikane (the friend).  The idea was for it to operate as a non-profit organization with the Winged “O” overseeing the distribution of funds. The group, led by Sorrell and fellow Winged “O” Bill Capp, began raising funds.

At the same time, the OCC was looking for a way for Club members to make tax deductible contributions to a scholarship fund for children of its employees.

In early 1981 the OCC Board of  Directors endorsed the creation of the Outrigger Living Endowment Fund, which would be dedicated exclusively to charitable, educational. recreational and scientific purposes, and to assist the under privileged.

In November 1981, then OCC President Bob Moore announced the establishment of the Outrigger Foundation and began accepting donations.  That first effort brought in more than $35,000 in cash and pledges that were to be used to supplement the Club’s athletic endeavors.  For the first time, the Board had placed a spending ceiling on sports activities and the Foundation was seen as a way to afford programs that might not otherwise be possible because of insufficient funds.

It was determined in 1982 that to be a tax free organization, the Outrigger Foundation would have to be a public foundation.  In May of 1983, IRS approval was received and the Outrigger Foundation was recognized as a public 501 (c)(3) tax free organization.  With this designation came restrictions on exclusive use of funds for Outrigger Canoe Club only activities.  At about this same time, the Outrigger Board of Directors was becoming increasingly concerned about the Club’s image in the community and wanted the community to see Outrigger as perpetuating Hawaiian sports for the enjoyment of all, rather than just its own athletes.

The Board appointed a Foundation Committee which was chaired by George Cook, with members Art Carswell, Paul Cassiday, Tommy Holmes, Bob Kashare and Ron Sorrell, to manage the Foundation and raise funds. The Committee began holding fundraisers and actively soliciting donations from Club members. The group was trying to raise $200,000 by the end of 1985. By mid-1985 they were more than halfway there.

One of the first athletes to receive funds from the Outrigger Foundation was Tony Crabb, an outstanding volleyball player, who had been named assistant coach for the U.S.A. Volleyball team in 1983 but needed a stipend to support himself during the training period. Tony was able to assist the National team in qualifying for the Olympics and the U.S. Olympic team in winning a Gold Medal in 1984 at the Olympic Games in Los Angeles. Turning down a chance to be head coach for the 1988 National and Olympic teams, he returned to Hawaii after the Olympics and played on many masters teams for the Club and coached the OCC Junior volleyball program for more than two decades.

Another athlete who received early support from the Outrigger Foundation was Kevin Olds who received funds to go to California to compete in the National C-1 Canoe Paddling Championships in 1985. Other early recipients were Missy and Kai Mowat who competed and won their divisions in the Iron Kids Competition at Disney World in Florida, and the OCC 10,000-Meter Paddleboard Race which was renamed the Duke Kahanamoku 10,000-Meter Paddleboard Race.

Kashare became chair of the Foundation Committee in 1985, and was assisted by Cassiday, Holmes, Arthur Reinwald, Sorrell and Leighton Taylor.

Similarly, the Outrigger Foundation was founded to sponsor, promote, encourage participation in and provide education and instruction in national and international athletic competition. Its funds were raised by contributions from Outrigger Canoe Club members, and from the annual Outrigger Foundation Auction.

“Both Foundations were organized for similar charitable and communal purposes,” said Tom Lalakea, former president of the Duke Kahanamoku Foundation. “We agreed that by combining the two organizations we could strengthen our financial base and fulfill our objectives more effectively.”

Following the merger, the ODKF set up its own Board of Directors, but OCC retained control of the Board, with two-thirds of the members coming from the Outrigger Canoe Club, and one-third from the community, basically mirroring the assets each group brought into the new foundation.  The Board started with nine members but that has now increased to eighteen members.

The purpose of the ODKF was to encourage athletes, teams or individuals who were contributing to the growth and development of sports in Hawaii; to support participation by island athletes in local, national and international competition; to assist in preserving, perpetuating and developing those sports and events which were part of Hawaii’s cultural heritage; and to provide scholarships.

“As you know, Duke was an active member of the Outrigger Canoe Club. By merging the two foundations, we strengthened our commitment to the youth of Hawaii and perpetuated the ideals that Duke believed in,” said Roy Kesner, Foundation president.” The new foundation provided us with an opportunity to reach out into the community to solicit funds to match those being donated by Outrigger members.”

The merger increased the assets of the ODKF, giving it a starting balance of $160,000. The Foundation developed guidelines for awards and formed a selection committee to review applications for grants and scholarships.

The ODKF awarded its first grant of $500 in June 1986 to City and County of Honolulu Lifeguard Debbie Wayman to compete in the United States Lifesaving Association National Championships. Debbie, a well-known water sports enthusiast and regular competitor in OCC paddleboard races, was part of a Honolulu team of lifeguards competing in the event. She won the lronwoman event, a run-swim-paddle triathlon and the women’s rescue board event. It was the first time that points earned by women counted toward the team total.

By mid-1986 the Foundation set a four-year goal of raising $1 million for its grant and scholarship programs. This was to be accomplished through the ODKF Auction, contributions, Macfarlane Regatta T-Shirt sales, and the annual end of year campaign. By the end of 1986 with the $55,076 acquired from the Duke Kahanamoku Foundation, and $44,258 generated through contributions and fundraisers, the Foundation’s fund balance increased to $208,075 by December 31, 1986.

The disbursements to qualified athletes were restricted during 1986 as the Foundation attempted to build up the fund balance. The Foundation continued the scholarship program of the Duke Kahanamoku Foundation and granted Keone Smith its first $1,000 scholarship, continuing a scholarship granted three years earlier by the Duke Foundation. The Foundation also granted Michael Cho $100 to assist him in an air gun competition for the handicapped.

In 1987 the ODKF set up Memorial Contributions as a way of giving to the Foundation. The first four memorial donations were in the names of Chinn Ho, Dr. Charles S. Judd, Mrs. Lou Boyd, and Gilbert Brightman. As of 2014, there have been 53 memorial funds set up in memory or honor of loved ones.

The first designated fund was a $1,000 donation by New Zealand Breweries Ltd. (Steinlager) made in the names of the Honolulu Star Bulletin and KHON-TV, winners of a celebrity race during the Hawaiian Canoe and Kayak Championships. The funds were earmarked for athletes competing at the national or international level in kayaking or canoe paddling.

Since 2002 ODKF has sponsored the Duke OceanFest at Waikiki Beach each August to celebrate Duke Kahanamoku’s birthday, with a carnival of water games that Duke would have loved: Longboard Surfing, Paddleboard Racing, Swimming, Tandem Surfing, Surf Polo, Beach Volleyball, and more.

Since its inception the ODKF has become an important charitable foundation in Hawaii granting scholarships and grants to hundreds of local athletes over the past three decades.

The Foundation has 15 ODKF Board-Designated Legacy Funds for which scholarships and grants are awarded to sporting events and teams, as well as individual scholars and athletes. The funds perpetuating Duke’s sports are the:

In addition, the Legacy Academic Scholarship funds are the:

To learn more about ODKF read their Annual Reports or visit their website at: dukefoundation.org