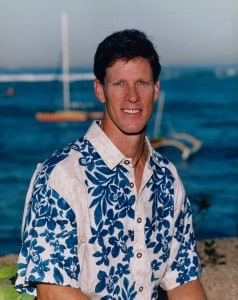 At the age of 13, when the paddle handle was bigger around than his arm, Walter began his athletic career as a steersman for the Boys 12 and under crew. Paddling from age group to age group, many of these young paddlers stayed together to become one of the most successful crews in Club history, winning almost every State championship they paddled in.

After graduation from Punahou School, Walter went on to play football at Orange Coast College and later at the University of Hawaii. Because of his size, he was unable to paddle during those football years but he coached kid’s crews trying to instill in them the sense of pride and competitive sportsmanship that he had learned from growing up in the Club.

In addition to his knowledge of canoe paddling, he is a recognized authority on canoe building and racing and is highly regarded by the Oahu Hawaiian Canoe Racing Association and other canoe clubs throughout the state. He was also actively involved in helping establish the rules and racing polices of OHCRA.

In addition to his involvement in the paddling programs, Walter helped to guide the OCC Motorcycle Team. The team participated in motorcycle races throughout the state. Walter and three other Club members raced in Sierra Blanca 200K in Mexico, representing the Club.

In 1986 Walter and Brent Bixler took a Tahitian lagoon style canoe and made modifications to it; enclosing the deck area, added foot-pedal steering, beefed up the rigging and ended up with a prototype for a one-man outrigger canoe. From this they designed and constructed the Kaiwi Challenger, which then took the sport of one-man canoe racing from the calm of tropical lagoons to the might and force of the open ocean.

Subsequently other designs have flourished and the interest in the sport has been nothing short of phenomenal. Kanaka Ikaika added a one-man division to its already popular kayak/surfski racing schedule. One-man canoe racing is a sport enjoyed by many members today.

Walter was elected to the Board of Directors of the Outrigger Canoe Club and became Club President in 1994-1995.  Preceding him as Club President were his great uncle Walter J. Macfarlane; his father, Rab Guild, and his aunt, Mary Flanders Philpotts-McGrath.

A grand-nephew of Walter James Macfarlane, he remains active in the annual Walter J. Macfarlane Memorial Canoe Race on the 4th of July, inspiring the Club’s paddlers in a pep rally before the race, and often represents the Macfarlane family at the awards ceremony at the end of the race. In 1984 he dedicated a koa canoe that he had made in memory of his grandmother, Muriel Macfarlane Flanders, as a perpetual trophy for the Boys 18 race.

Guild was selected to the Outrigger Duke Kahanamoku Foundation Hawaii Waterman Hall of Fame in 2015.  It was noted that the veteran waterman has been a force in modern-day outrigger canoe water sports.  A champion paddler, he played a key role in the creation of the OC-1 canoe and continues to coach and inspire many.

Walter continues to be active in water sports at the Club, coaching, chairing the committee which oversees the Club’s canoes, and lending his expertise where needed.