You are here: Home / About the OCC

Let this be a place

where man may commune with sun and sand and sea,

where good fellowship and Aloha prevail, and

where the sports of old Hawaii shall always have a home.

More than 110 years after its founding, the Outrigger Canoe Club continues to be a place where the “sports of Old Hawaii shall always have a home.”

Our colors are crimson and white.

Outrigger has been the catalyst in reviving and promoting ocean sports in Hawaii, and the fervor for those sports has spread around the world.

Our story began in April 1908 when a group of Honolulu businessmen, led by Alexander Hume Ford, sent a letter to various organizations and the Honolulu newspapers soliciting members for the new Outrigger Canoe and Surfing Club at Waikiki Beach. The new club would be “. . . a place where surfboarding may be revived and those who live away from the waterfront may keep their surfboards.”

The Outrigger Canoe Club officially opened on May 1, 1908.  The Club was located on Waikiki Beach on 1.5 acres between the Moana and Seaside Hotels abutting the Apuakehau Stream that brought waters from Manoa and Palolo valleys to the ocean. The stream formed a lagoon alongside the Club. Ford found two authentic Hawaiian grass houses and placed them at the edge of the lagoon.

One was converted into a storage shed for canoes and surfboards. The other, facing the ocean, became the dressing room. The first shower was a pipe with a showerhead rigged up among branches of a hau tree. A shed constructed of coconut fronds provided additional canoe storage. A stand of hau trees was propped up to become the Hau Tree Lanai and a pavilion for dancing and social events was built over the lagoon.  The Outrigger held its first water carnival on July 19, 1908 when the Great White Fleet came to Waikiki. Events included surfboard demonstrations, canoe races and an aquatic parade.

In early 1910, Ford arranged a surfboard contest and canoe races for a cruise line whose ships would be making two stops in Hawaii. Four silver cups were made for the race and were known as the Frank Clark Cups. Only one cup was awarded, for the Best Woman Surfer at the Outrigger Canoe Club. The winner was Josephine C. Pratt. It was the first trophy awarded by the Club, and is believed to be the first surfing trophy ever awarded and the first surfing contest won by a woman. The men’s event was held in 1910 but the trophy was never awarded due to the judges not being able to tell the participants apart. Seven years later the men’s event was finally held and the winner was Ernest Cook.

The Club’s first 4th of July canoe regatta was held in 1910 when several Navy ships were anchored in Honolulu. The Walter J. Macfarlane Memorial Regatta has been held on the 4th of July each year since 1943 and is the longest-running outrigger canoe regatta in the world. It is the only surf race of the Oahu Hawaiian Canoe Racing Association regatta season.

Outrigger focused on ocean sports during its early years. In 1917, a dispute among the Club’s Board of Directors resulted in two slates of officers running for the Board. One group favored recreational ocean sports and social activities.  The other, led by Club Captain George “Dad” Center, favored the Club’s forming teams and participating in multiple amateur sports, including football, basketball, volleyball, softball, soccer, and track and field, as well as swimming and ocean sports.  Center’s slate won and the OCC has fielded teams in a wide variety of ocean and land  sports ever since.

The OCC is an amateur athletic club and was active in the AAU for many years.  The Club wishes its professional athletes well but does not sponsor or financially support them in their endeavors.

The Outrigger Canoe Club is a private club with about 4,900 members, ranging in age from 10 years old to seniors.  To compete for the Club, an athlete must be a member.

In 1964 when its lease was up on the Waikiki site, Outrigger moved about a mile down the beach to its current location at 2909 Kalakaua Avenue, at the foot of Diamond Head where members continue to enjoy ocean and land sports and perpetuate the sports of Old Hawaii 365 days a year.

Some of the things we’re proud of: 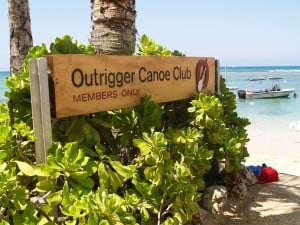 On this site you’ll find the history of various sports the Outrigger Canoe Club has competed in during the past century and the results of the competitions the Club has sponsored, as well as articles from the Forecast and Outrigger magazines published by the Club for its members. Under OCC Archives you’ll find a variety of historical information about our Club and our athletes, including oral histories with more than 100 of our past and present members.  Historical and current photos may be found in the Photo Archives section.

This site is a project of the Outrigger Canoe Club Historical Committee to preserve the illustrious sports history of the Club. The webmaster and historian is Marilyn Kali.  Comments on the site may be sent to OCCHistoricalComm@aol.com.