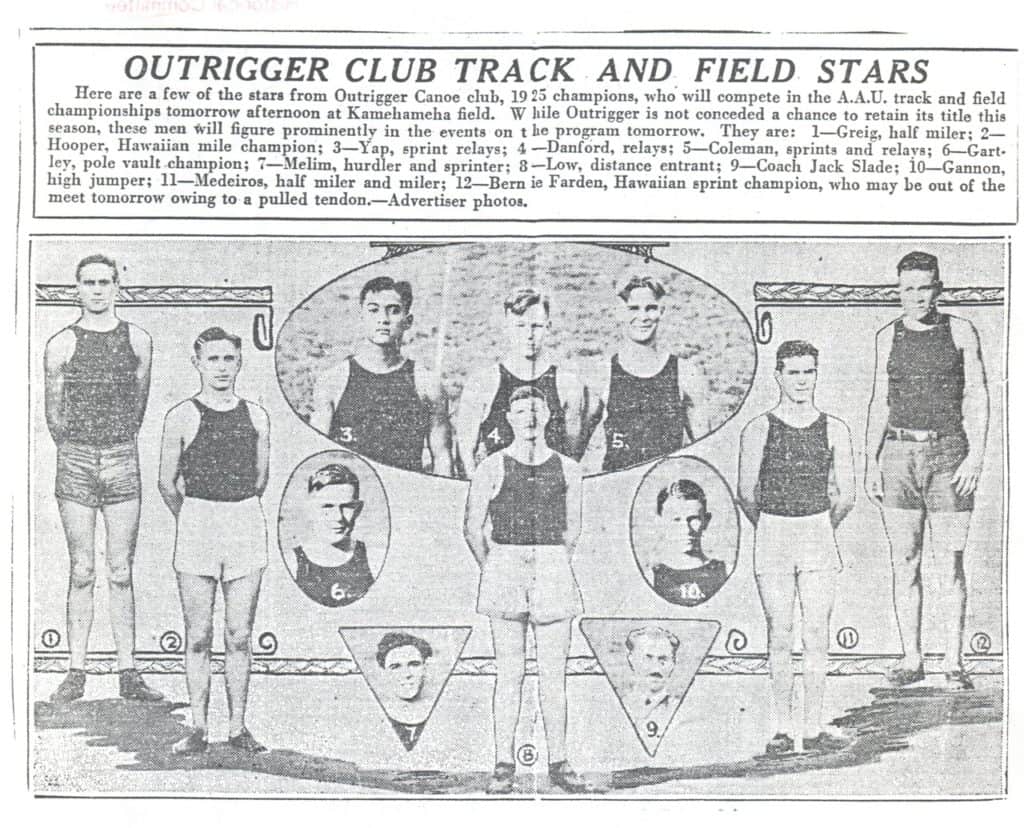 Outrigger Canoe Club had a track and field team from 1918 to 1929.  The team competed against local and mainland teams in AAU-sanctioned meets.  OCC’s team was composed of  local high school stars, former college athletes, and others who were members.

Outrigger’s most accomplished track star was John M. Watt, a Punahou graduate, who attended Cornell University, where he set a world indoor record in the 50-yard hurdles of  6 4-5  seconds at the Meadowbrook Club in Philadelphia on March 21, 1917. Watt was selected to the 1920 U.S. Olympic team in the hurdles, but was injured during the preliminary heats and did not compete in the Olympic finals.

Watt competed on the OCC team every year except the Olympic year of 1920.  Outrigger Club Captain George “Dad” Center, coached the U.S. swimming team in 1920 which included Duke Kahanamoku and other OCC and Hawaii swimmers, so the Club was represented in both swimming and track in Antwerp. Watt and Center remained life-long friends.

Watt held Hawaii AAU records in the hurdles, as well as several other events, for a number of years.

There were generally two track meets a year: the Rainbow Relays sponsored by the University of Hawaii, which started in 1925, and the Hawaii AAU Senior Track and Field Championships.  The meets were held initially at the Punahou track, and later at Kamehameha Field.  Outrigger’s strongest competition was Palama Settlement and the University of Hawaii.

Many of our track men were prominent members of the Club.  Read about each season on the links below.

Outrigger did not keep records on its track and field teams, so the information has been recreated from newspaper articles. First names of many of the athletes were not reported by the papers. The news stories may be found at the end of each year’s results.