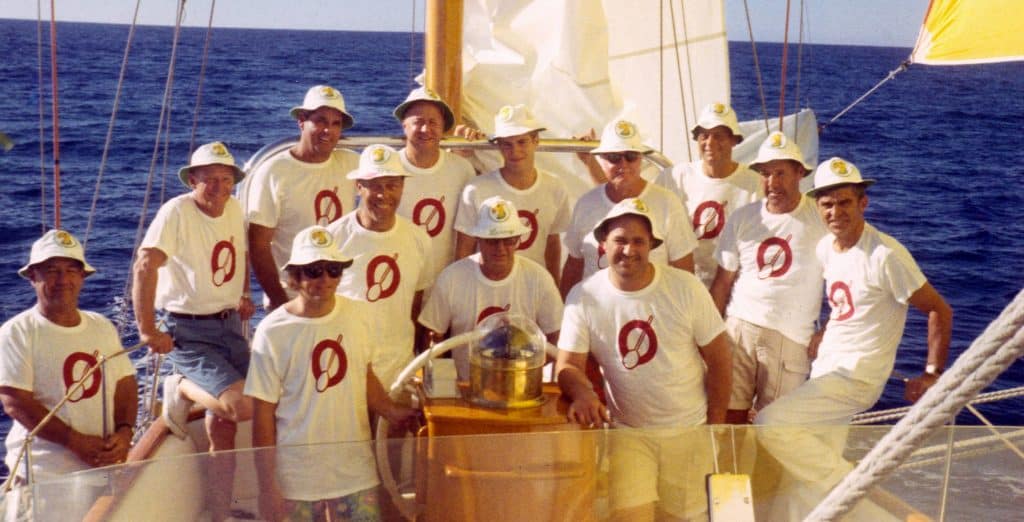 Although the Outrigger Canoe Club was not regarded or referred to as a “yacht club”, nevertheless sailing has always been an important activity in our history.  Our Charter and Bylaws provide for the promotion of all athletic activities, and for many years before World War II Dad Center, Duke Kahanamoku, Toots Minvielle, Thomas Arnott, Bob Bush and others raced Hawaiian koa canoes rigged for sailing.

After moving to our location at Diamond Head, there was a resurgence in sailing that resulted in the Club building a Sunfish fleet of fourteen and a Pacific Catamaran fleet of six.  The Club  regularly held races for Sunfish and Pacific Catamarans, in addition to having one of the most active junior programs in Hawaii.

The Club competed in the Hawaii State Championship Regatta sponsored by the Waikiki Yacht Club from its inaugural in 1965.

Outrigger sponsored its first sailing regatta in December 1966 with its First Annual OCC Invitational Christmas Regatta for P-Cats and Sunfish.

In 1967, our Sunfish (and later Scorpion) sailors began a new competition between Outrigger and the Kauai Yacht Club in Nawiliwili Harbor.  Each club won two regattas in the series, with Kauai defaulting in the 1973 and last regatta.

The Club became a member of the Hawaii Yacht Racing Association on June 10, 1969 and was then qualified to be competitively represented in regattas conducted by member clubs and also to participate in the meetings and committee organization of the Association.

The OCC crowned its first Club Sailing Champions in 1970 after a two-day five race series in the ocean in front of the Club.  Ted Crane emerged winner in the Hobie Cat 14′ division and Cline Mann won the Scorpion division.

In January 1973 Outrigger hosted the first annual Hobie Cat World Championship Regatta with most of the four-days of racing in the waters of Waikiki.  Hobie Alter provided 54 brand new Hobie Cats for the regatta so every entrant had an equal chance.  Outrigger sailors who qualified for the regatta: Harold Hutchings, Leith Anderson and Mike Holmes.  They finished 10th, 11th and 15th place, respectively.  Not placing were Bob Anderson and Karl Heyer III.

The Club became known for its Outrigger Beach (Lemans) Start.  In it, skippers and crews stood beside their boats, which were in positions for which they drew.  The boats were afloat with no one aboard; the race was then started like a swimming race, by a starter.  At first, the finish was when the bow of the boat touched the sand, but swimmers complained about catamarans hitting the beach at 15 knots, and an offshore flag was then used as the finish line.

A windsock was erected in the 1960s to mark the OCC channel entrance and give an accurate indication of wind velocity and direction.

Over the years the Club has hosted yachts competing in the Trans Pacific races belonging to members and guests.

Without a lot of storage space on Club grounds, the Beach & Water Safety Committee, composed of Norm Dunmire, Tom Reiner and Wally Young, devised an anchorage system in the ocean in front of the OCC and Elks Club.  They laid stainless steel cables on the ocean floor, anchored at each end and intermittently with eyes imbedded in concrete.  Time and tides defeated this engineering as the cables chafed from constant movement, frayed in the eyes and broke.  The intermediate eyelets were eliminated and the mooring worked.  At one time more than 50 boats bobbed off our beach.  But Hurricane Iwa arrived in 1982 with high water and strong winds and so began the end of Outrigger sailing.  Lacking protected moorings, boats were swept away, some as far as China Wall at the foot of Kapahulu Avenue.  A decade later, Hurricane Iniki mopped up the few remaining boats at anchorage.

Today, a mooring line exists for boats under 20 feet.  Larger boats create their own moorings.  Most of the moored boats are outrigger canoes, sailing canoes and Outrigger’s Boston whalers which support the canoe racing program, and can also assist the fire department and county lifeguards with ocean rescues.

Commodores of the OCC