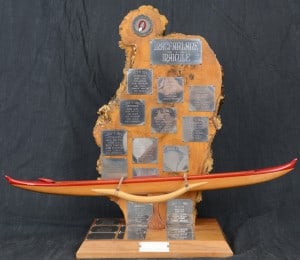 First presented in 1979, the Macfarlane Makule Trophy was created from a log slice. It was designed and created by Domie Gose and Hank Lass. Sitting atop the base is the hand carved koa canoe Leilani.

The names of the winners of the Makule race appear on silver plaques on the log and base of the trophy.

The trophy was retired in 1998 when OHCRA added additional masters races to the regatta schedule and the Makule race was deemed no longer needed. 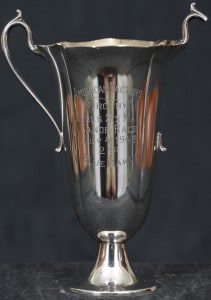 The American Factors Trophy was first awarded on July 4, 1943 to the second place Girls 6 crew.  The names of the crew were not recorded but the steersman was Blue Makua.

This trophy was awarded to the winning Women’s Senior 6 in the July 4, 1946 Macfarlane Regatta.  The Trophy was won by Outrigger Canoe Club with a crew of Ann Monahan, Pat Honl, May Freeth, Ivanelle Mountcastle, and Betsy Sumner and steered by W. D. Cook, Capt. 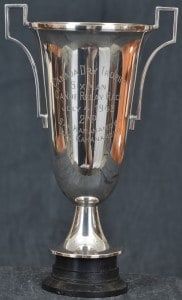 The Canada Dry Trophy was awarded on July 4, 1943 to the second place crew of the Six-Man Canoe Relay Race.  The only two names on the trophy are Sam and Duke Kahanamoku.  According to newspaper reports, Duke shared  steering duties with Charley Amalu in the race, losing to Beach Patrol, steered by Harry Robello and Blue Makua. 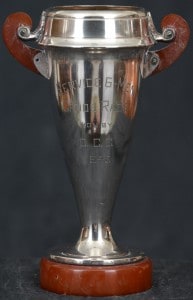 This trophy carries a date of 1946 in its inscription but the race referred to was actually held on July 4, 1945.  There were no military races after 1945.  Members of the winning Enlisted 6 Service crew were Tom O’Brien, Carlos Rivas, Jim Fernie, Bob Ireton, Mickey Beggs, and Duke Kahanamoku. 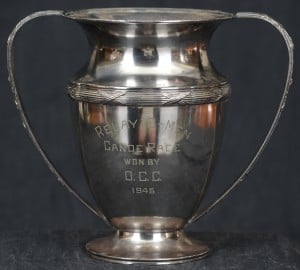 In 1992 for the Macfarlane Regatta’s 50th anniversary, the Club held a relay race in celebration of the 1943 event with the Canada Dry Cup being presented once again to the winner.  OHCRA has since declined renewal of the race due to safety consideration. 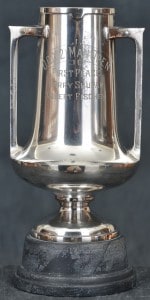 This trophy was won by Robert Fischer and Harry Shupak in the 1944 Walter J. Macfarlane Regatta in the two-man open race.