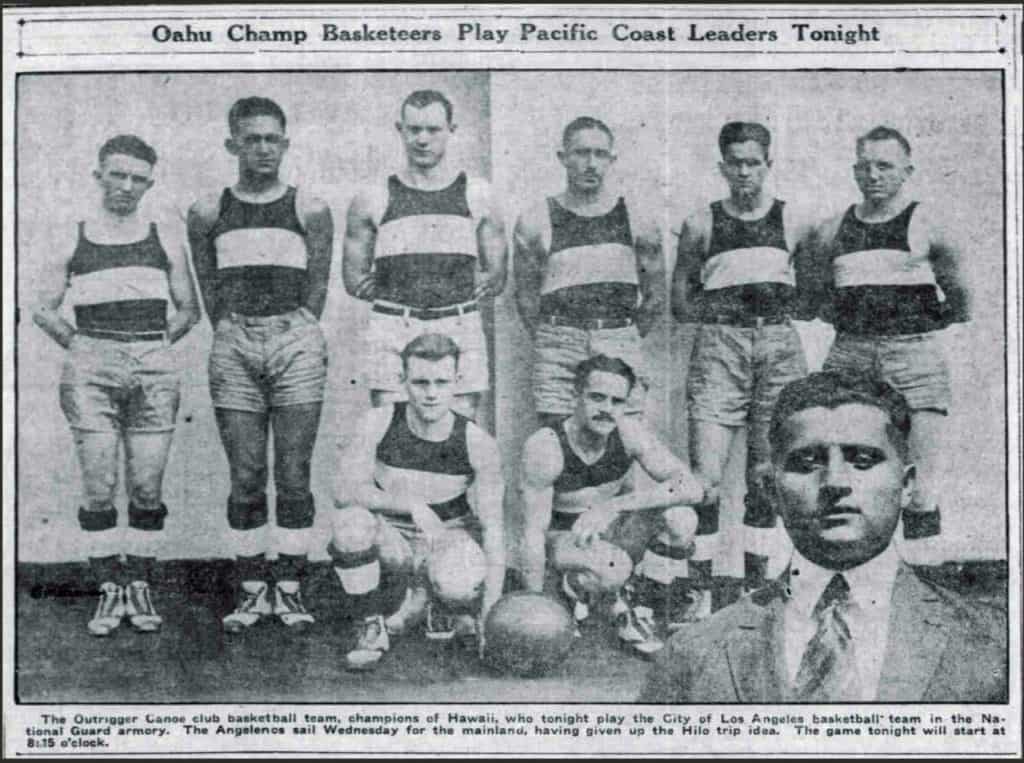 Outrigger Canoe Club fielded a basketball team that competed in several local leagues from 1919-1922, compiling a record of 31 wins and 15 losses.  The team competed against alumni, business and military teams.

Club Captain Dad Center announced that the Outrigger would be fielding its first team in 1919 and would play in the Oahu Service Athletic Basketball League.  The 1919 team had a 3-6 season record and a 3-3 league record, finishing in fourth place.

In 1919, the teams played by AAU rules and player eligibility requirements.  The teams played four ten-minute quarters with two minutes between quarters and ten minutes between halves.  The rules stated that a player taken out in the first quarter could not return in the second but could play in the third and fourth quarters; one taken out in the second quarter could not return until the fourth quarter; and a player taken out in the third quarter was out for the remainder of the game. Admission of 30-cents was charged spectators and the teams split the gate with the winner getting 60 percent and the loser 40 percent.

The season ran from January to March, and most games were played at the National Guard Armory.

In 1920, the OCC basketball team finished second in the AAU Basketball League with a 4-1 record, finishing in a tie for second place.

In 1921, Outrigger went undefeated in the Oahu Amateur Basketball League with a 13-0 record, and was 15-2 for the season.  The Club team then went on to compete against the visiting Los Angeles City champions and lost.

In 1922, the Club competed in the Honolulu Senior Basketball League, finishing the regular season with a 4-2 record.  The top four teams in the league competed in a round robin for the championship, and Outrigger finished in second place, losing by one point to the National Guard in the championship game.  However, for the first time, a Territorial Championship was played, and Outrigger went undefeated in the Territorial Championships (3-0), defeating Hilo Boarding School for the title.   The Club also played a Schofield Barracks team, the first civilian team to play on the Schofield courts.

Later in 1922, the Club announced that it would take its basketball team to the Mainland to compete against West Coast teams, but that later turned into an all-star traveling team.

Nothing more was written about Outrigger basketball, and it was apparently dropped as a Club sport.

Outrigger had several player/coaches including Piercy Nottage and Claude V. “Skeeter” Swann who led the team.  Swan was considered the best basketball player in the islands at the time, and Nottage was responsible for organizing the basketball league for the AAU.

Outrigger also fielded light-weight basketball (under 135 pounds) teams in 1920 and 1921.  The teams were only moderately successful and forfeited a number of games due to lack of manpower.

Outrigger did not keep records on its basketball teams, so the information has been recreated from newspaper articles.  First names of many of the athletes were not reported by the papers.  The news stories may be found at the end of each year’s results.