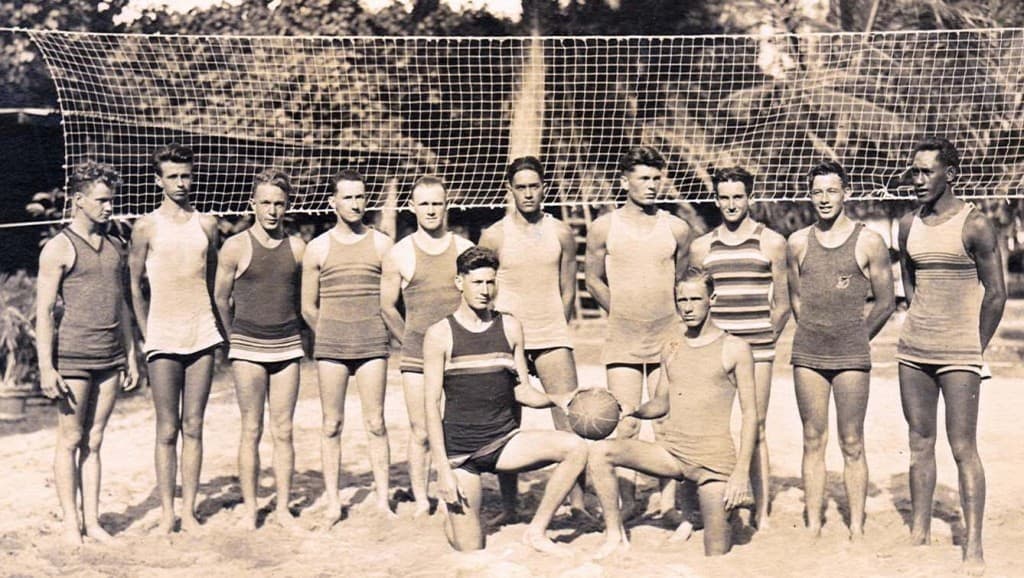 Volleyball has been played at the Outrigger Canoe Club for more than a century and is the major non-ocean sport sponsored by the Outrigger. And in fact, sand volleyball was first played at the OCC on a day in 1915 when the surf was flat and members of the ocean-front Club were grumbling about not having anything to do. In response, George “Dad” Center, the Club’s head coach, bought a volleyball net and a couple of volleyballs, and put the net up temporarily between the surfboard lockers and the canoe shed parallel to the beach.

The game caught on and in no time, it outgrew the space so the court was relocated to a larger area in front of the Hau Tree Lanai where it continued to attract both males and females of all ages. Before long the game, which started as something to do when the waves were down, became not only a sport for fun and recreation, but a competitive sport for doubles, fours and six-man teams. Club members played against each other because there were few others to play. The only other teams were at Oahu Prison and Palama Settlement, but they were used to playing on a hard court, rather than sand.

By 1918, Outrigger had organized teams in several sports, including hard-court volleyball, and began playing in city leagues, where they produced a number of winning teams. By the mid-1920s many of these leagues had been abandoned for lack of interest.

However, at the Outrigger, the sport continued to grow in popularity. One advantage was that the sand volleyball courts were located in plain view of the members, which sparked interest in the sport: everyone wanted to get into the game. Chalk boards were set up at the courts and those waiting to play signed up. Volleyball became an after-work pastime for business men who arrived shortly after four p.m. in coats and ties, heading for the men’s locker room. They soon emerged in bathing attire and headed for the courts. Duke Kahanamoku was one of the “regulars” and was noted for his vertical jump of five or six feet. 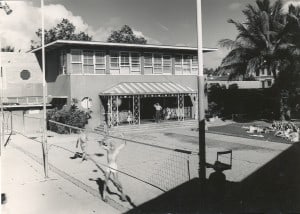 When the new Outrigger Canoe Club opened in Waikiki in 1941, the volleyball courts were situated to the left of the walkway which led from the entrance down the center of the Club with a spacious lawn on the other side. The courts were packed with players and the lawn was filled with those watching or waiting their turn.

On Sunday mornings, for several weeks each year, an Open Doubles tournament was held and hundreds of people gathered to cheer on their favorite players. For three consecutive years, Pat Wyman and Billy Cross won.

During the fifties, each Wednesday night as many as eight teams played against each other in the Six Man Open Tournament. Afterwards, a table in the dining room was reserved for the players who were offered a special dinner for a dollar and fifty cents. Gil Carr. Kenneth Chaney, Thad Ekstrand, Bill Baird, Bill Morris, and Bill Barnhart were among the dozens of players who participated.

There was even a kane-wahine tournament where husband and wife duos, as well as other mixed partners competed. Regulars were Jim and Cissy Beardmore, Bill and Billie Baird, and Ron and Carol Sorrell. A four-man Business Man’s tournament also attracted crowds, with Judge Wilford Godbold, Duke Kahanamoku, and “Dad Center” as some of the top players.

When a wahine league was formed in the fifties, they played both on sand and hard courts, often practicing at the courts located behind the Waikiki Fire Station. Among the outstanding players were Ruth Campbell, Billie Baird, Cynthia Hemmings, Alice “Baby” Cross, May Balding and Aggie Quigg.

As the venue for beach volleyball was limited, in order to participate in city and territorial competitions the teams began playing on hard courts in 1950, winning challenging tournaments such as the Open City-wide Championship and the Hawaii AAU Championship. By 1955, OCC volleyball players began talking about competing in the National Championships on the Mainland. In 1956, the ‘Riggers made their first appearance at the U.S. Open Volleyball Championship playoffs in Seattle Washington as a joint team with the Central YMCA. Tom Haine was named to the first All American team, and Bill Cross was named to the second team. With AAU rule changes that required a team to be the state champion to enter, the Outrigger team continued to hone its skills in local competition for the next few years.

In 1960 the OCC rejoined the AAU and after much fund raising, its three-time State Championship volleyball team earned the right to represent Hawaii in the 1960 National AAU Championships in Dallas, Texas, finishing seventh among 34 teams. In 1964 the Club team returned to the National Championships in New York, taking seventh place out of 44 competing teams. In 1966, the OCC team finished in fourth place and was pictured prominently in Sports Illustrated. Our members formed the nucleus of the Hawaii All-Star Team which competed against the Japanese Olympic team. Our Men’s Open team captured the National AAU Championship in 1967 and several members of the team were named as All-American and selected to represent the U.S. at the Pan American Games.

Entering the Olympic year of 1968, Outrigger was ranked as the best team in the nation along with the West Side Jewish Community Center of Los Angeles. Our coach, John Lowell, had already been selected as the Manager of the USA Olympic team. The OCC team won the Hawaii State Championship and went on to win the National AAU Championship for the second straight year. Four members of the Outrigger team were selected for the ’68 Olympic team: John Alstrom, Tom Haine, Jon Stanley and Peter Velasco. In Mexico City, the U.S. Olympic Team finished seventh but had the distinct honor of being the first team to beat the previously unstoppable team from Russia.

Outrigger’s Open Men went on to win the National AAU Championship in 1975 and 1976.

In 1977, the Club sent its first junior team to compete in the Junior Olympics. The team, which was made up of some of the sons of the winning Open Team, now the Masters, finished in third place in the AAU sponsored event, with two being selected to the All-American team: John Hedlund and Colin Chock Jr. In 1980, the OCC Boys won the Club’s first national title for a junior team, claiming the Junior Olympics championship. This was followed by wins by the Boys 12 in 1990 and 1991, and the Boys 14 in 1994.

In the 1980s when the USVBA added masters divisions, Outrigger dominated for the next two decades, winning the Men’s 30 twice, the Men’s 35 title twelve times, the Men’s 40 championship five times, the Men’s 45 twice, and the Men’s 50 twice. Included in this marvelous record was a four-year span, 1991-1994, when OCC was undefeated in both the Men’s 35 and Men’s 40 divisions. The nucleus of these teams were Jon Andersen, Kimo Brown, Chris Crabb, Charlie Jenkins, Tom Madison, Randy Shaw, Ralph Smith, Jon Stanley and Ilmar Tarikas. Others who played on either the 35s or 40s were Jay Anderson, Dennis Berg, Jim Bukes, Buster Chapman, Mike Cote, Scott Rigg, John Zabriskie, Wayne Kekina, Kahea Chock, Alan Lau and Tony Crabb.