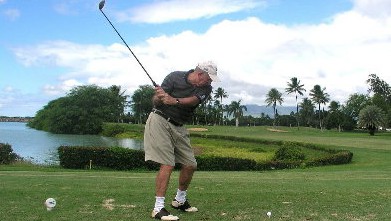 Outrigger Canoe Club members took up golf in the 1970s, with more than 300 participating in Club golf tournaments a decade later, making golf one of the most popular land sports at the Club.  With no course of its own, tournaments were held on public, private and military courses on Oahu, including Olomana, Hawaii Kai, Leilehua, Navy Marine, Waialae, Kapolei, Mid-Pacific, Turtle Bay, Luana Hills, Kalakaua, Kaneohe Klipper and Hickam.

In the 1970s, intra-club tournaments were held twice a year, in the Spring and Fall.  As the popularity grew, tournaments grew to four times a year, and then monthly.

In 1988, the Club joined the Hawaii State Golf Association so members could take advantage of the U.S. Golf Association’s Handicap and Information Network (GHIN).  The GHIN maintained computerized handicap information on all its members.  With established, centrally maintained handicaps, the Club hoped to arrange for competitive golf matches for the Club team.  By the end of 1991 OCC had more than 100 members who joined GHIN and were members of the Outrigger Canoe Club Golfers.  Membership became a requirement to play in Club tournaments in 1991.

In the 1990s, the Club began holding annual Match Play and Stroke Play championship tournaments and recorded the winners on a perpetual trophy.

By the end of the 1998, participation was waning and a new group of golf enthusiasts, headed by Phil Sevier, stepped up and revived golf play.  They scheduled monthly  tournaments with a variety of formats to keep things interesting for novice and experienced players.

In 2009, the Outrigger Golf Team began a competition with the Pacific Club.  Twelve OCC Golfers teed off against 12 opponents from the Pacific Club.   The Aikane Cup became the perpetual trophy for the event. The competition included a mix of best ball, singles and alternate shot matches.  The winner gets to display the trophy for the year they win it.

A Masters tournament was started in 2014.