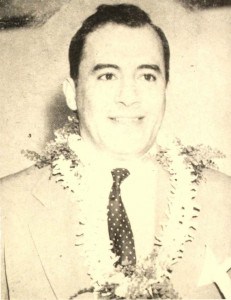 On June 4, 1943, members and directors of the OCC were stunned by the news that Macfarlane, a Territorial legislator and businessman, had passed away in Oakland, California.

Walter “Mac” as he was known by his many friends was president of the Outrigger Canoe Club at the time of his death.  He had been elected in 1937 when the Club was facing a number of problems: the treasury was practically non-existent, the lease on the grounds owned by the Queen Emma Estate where the Club was located was about to expire; and the buildings were obsolete and unfit to continue in, and needed rebuilding.

Walter “Mac” had an indomitable and courageous outlook with a determination and an optimism that a plan to finance new buildings and build a new Club on modern lines could be carried out.

A committee was formed with the directors and other members and a formula for the successful continuation of the Club was blueprinted.  Many members dropped out due to the financial uncertainty.  Walter “Mac” stayed on and with a small group of supporters devoted every ounce of his energy and most of his time, finally succeeding in selling bonds and raising the capital to build the Club at Waikiki Beach.  The new Club finally opened in 1941 and was well on its way to success when he passed away.

Walter “Mac” was born in Honolulu on September 5, 1907, the son of a kama`aina family.  He was the grandson of James and Abigail Campbell, founder of the Campbell Estate, and the son of entrepreneur and polo player F. Walter Macfarlane Sr. and composer Alice Kamokila Campbell.  He was the nephew of royal descendent Abigail Kawananakoa.

He attended Punahou School where he was prominent in athletics; later prep school at Palo Alto, graduating from the University of Hawaii where he was a member of the football team.  He was vice-president of the advertising firm, Bowman, Holst, Macfarlane and Richardson, and a member of the Territorial Legislature being elected to terms in 1935, 1937 and 1939.  He took particular interest in those problems concerning Hawaiians and served on committees of the Legislature whose object was to improve their condition.

From 1939-1941 Walter Mac and his OCC Board of Directors were busy raising funds, designing the buildings and constructing the new Outrigger Canoe Club on Waikiki Beach to replace the old termite-eaten buildings.  The dedication and opening of the new Club coincided with Kamehameha Day in 1941 so the Club sponsored a highly successful program of aquatic activities that included a few canoe races.

Walter Mac got married on December 1, 1941 in Las Vegas, and was on his honeymoon on the Mainland when Pearl Harbor was bombed.  He left his bride with her parents in Mexico City, and returned to Hawaii.  With Hawaii at war, there were no ocean sports in 1942, and with the Club operating well and the war going well for the Allies, Walter Mac, still our president, went to visit his wife in early 1943.  He came down with typhoid fever while he was on the trip and died on June 4, 1943 in California at age 36.

Memorial services were held at the Club on June 6.  The Rev. Henry P. Judd delivered the eulogy, saying “This young man, who always had a smile for everyone, will never leave us.  Every bit of bamboo, every surfboard, every canoe and every person here will be living memorials of his sportsmanship and good fellowship.”

At the time of his death, the Club was planning to celebrate the second anniversary of its new Clubhouse on Kamehameha Day, June 11, 1944, with an aquatic carnival.  In respect for Macfarlane, Club manager Henry deGorog, suggested the Kamehameha Day celebration be postponed several weeks until the 4th of July and be renamed to honor our late president.

Bob Fischer who was planning the June 11 race, quickly got to work gathering trophies, and reworking the schedule to commemorate Walter Mac.  Without the work that Walter Mac had done, it’s entirely possible that the Outrigger Canoe Club would have disbanded, so Club members were eager to honor him.

In commemoration of the life and activities of Walter, the Matson Navigation Company and the Hawaiian Hotels donated a magnificent trophy, a great silver bowl, as a perpetual trophy to be competed for by the Senior Men’s Six Paddle racing crews. This trophy is still awarded each year to the victorious Senior Men.

The Macfarlane family has always played a prominent role in the Macfarlane Regatta.  For many years his mother Alice Kamokila Campbell  was on hand to award the perpetual trophies and share a champagne toast with the winners of the senior men’s and women’s races. After Mrs. Macfarlane’s death, Walter’s sister Muriel Macfarlane Flanders took over the honors.  Mrs. Flanders also donated several perpetual trophies for the races.

Mrs. Flanders’ three daughters and their children continue to participate in the running of the regatta and the trophy ceremony each year.  Walter Mac’s grandnephew, Walter Guild, crafted the Boys 18 perpetual trophy in honor of his grandmother Muriel Flanders.

The Walter J. Macfarlane Memorial Canoe Regatta is the longest running outrigger canoe race in the world celebrating its 76th Annual regatta in 2018.