Founded on May 8, 1908, the Outrigger Canoe Club was the first  club founded specifically to preserve and perpetuate the ancient Hawaiian sports of board surfing and outrigger canoe racing.

A month earlier 11 men sent a letter to various Honolulu organizations and newspapers, soliciting support for the proposed Outrigger Canoe and Surfboard Club at Waikiki.  “We wish to have a place where surfboarding may be revived and those who live away from the waterfront may keep their surfboards. The Club will own a certain number of canoes, while members will also have the privilege of keeping theirs under the broad lanai of the club house. . . The main object of the Club being to give an added and permanent attraction to Hawaii and to make Waikiki always the Home of the Surfer. with perhaps an annual Surfboard and Outrigger Canoe Carnival which will do much to spread abroad the attractions of Hawaii, the only islands in the world where men and boys ride upright upon the crests of the waves.”

The early Club was located on Waikiki Beach next to Apuakehau Stream which flowed into ocean.  The original clubhouse consisted of grass shacks for locker rooms and storage for the canoes and surfboards, and a pavilion used for social activities.

Although the OCC was originally a club for men and boys, it wasn’t long before the wives and daughters of members began demanding equal facilities.  Founder Alexander Hume Ford asked a friend, Mrs. Julia Frances Mills Swanzy, to form a Women’s Auxiliary so that the ladies could enjoy the same water sports as the men.  And the ladies did. Women’s Auxiliary

In fact, the oldest trophy that the Outrigger Canoe Club has is the 1910 Frank Clark Cup for the Best Amateur Girl Surfer at the OCC.  It was won by Josephine Cornelia Pratt, daughter of Honolulu’s Postmaster, who was 17 at the time.  It is quite likely that this is the first surfing championship ever won by a woman, and probably the first trophy ever awarded in surfing history.  Although a trophy was made for the men’s surfing champion it was never awarded as the men’s winner couldn’t be determined by the judges as they couldn’t tell the men apart on the waves. 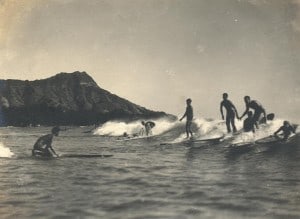 Beginning in 1908 Outrigger regularly held water carnivals in which members and the public could compete in surfing, canoeing, swimming and other ocean events.  The carnivals were very popular and thousands came to Waikiki to compete and witness the activities.  These contests continued until the start of World War II when barbed wire was strung across the beaches in Waikiki to prevent an enemy attack. During the war years, the military limited surfing to daylight hours when an opening was made in the barbed wire to let surfers enter the water. 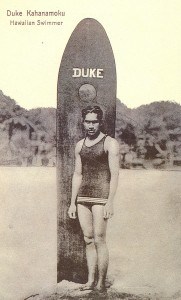 In 1917, Duke Kahanamoku joined the OCC after a Gold Medal performance at the 1912 Olympic Games in swimming.  Duke spread his love of Hawaii, surfing, swimming and the OCC when he traveled throughout the world demonstrating his “flutter kick” swimming stroke.  His surfing demonstrations were enthusiastically received and before long, surfing was being enjoyed in Australia, New Zealand, South America and both the east and west coasts of the United States.

Duke is known today as the “Father of Modern Surfing” and has been so honored in the Surfers Hall of Fame in Huntington Beach, California.  Duke remained an active member of the OCC until his death in 1968.

OCC member Joe Quigg revolutionized surfing in 1938 when he designed the first shaped surfboard with blended rail curves.  Compared to the flat boards of the past, Quigg’s boards were shaped to get the best ride possible on a wave.  Billions of boards later, Joe’s design has gone around the world and the surfboards of the early Hawaiians belong to a bygone era.

Outrigger members have always enjoyed surfing as a recreational sport, and many have taken surfing to a higher level of competition.  Members entered and won the Makaha International Surfing Championship, with Fred Hemmings Jr. and Joey Cabell each winning three times and Paul Strauch once.  Hemmings also won the Junior Division twice, along with Tim Guard, Strauch and Keone Downing.

In 1965, OCC sponsored the Duke Kahanamoku Invitational Surfing Contest at Sunset Beach.  Through the efforts of Hemmings and others, it was the first surfing event to be telecast on a regular basis by ABC Wide World of Sports.  OCC produced two champions: Ricky Grigg in 1966 and Cabell in 1969.

The Outrigger joined the Hawaiian Surfing Association in 1967 and the Outrigger surfing team competed regularly in their events.

Spearheaded by Hemmings and Randy Rarick, the International Professional Surfing League was founded as the original world governing body of professional surfing.  They developed the first international ranking system and created a global tour.  The organization evolved into the Association of Surfing Professionals in 1983.

Outrigger is a strictly amateur club and as surfing became more organized and cash prizes were offered, Outrigger no longer sponsored or sent Club athletes to such events.

Since 1966, the OCC has sponsored an intra-Club surfing contest, surf permitting, each summer in the waves in front of the Club.  The contest is open to all ages from Menehune to Grand Masters.  The event regularly draws 50-100 contestants.

Outrigger has produced some great surfers including three-time women’s world champion Carissa Moore, and big-wave riders Kai Lenny and Noa Ginella, who are currently riding the world’s best waves around the world.

Outrigger Canoe Club and its members have been directly involved in the sport of surfing, from reviving it in the early 1900s,  to sharing the sport around the world, to designing the shaped surfboard, and to keeping surfing competition alive.

You can find our members at Old Man’s, Tonggs, Castles and places in between, every day of the week, from sunrise to sunset!   The sports of Old Hawaii will always have a home at the Outrigger Canoe Club!

OCC’s Vital Role in Resurrecting the Sport of Surfing

Where to Surf at the OCC

How Our Surf Spots Got Their Names

A Legend Born of the Waves