You are here: Home / Ocean Sports / Surfing / How Our Surfing Spots Got Their Names 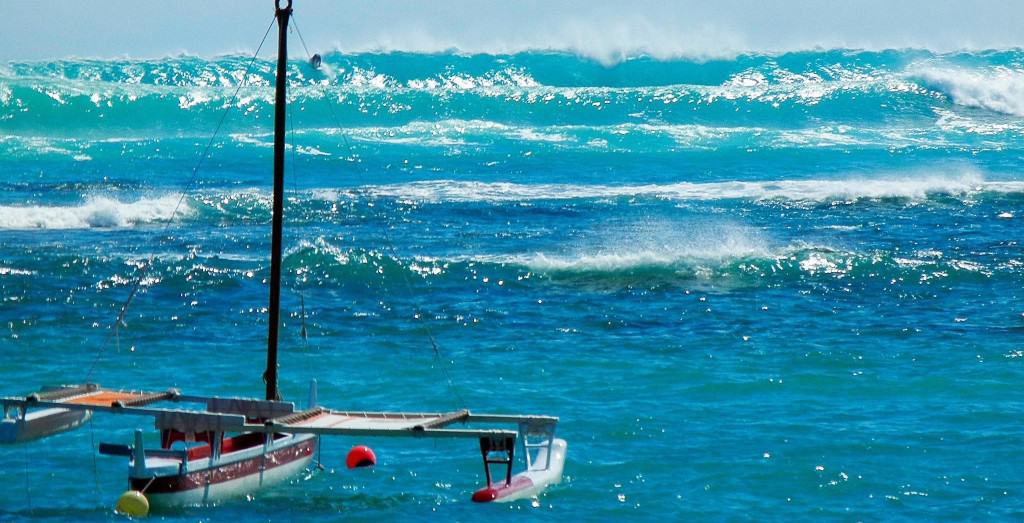 Honolulu’s former deputy fire chief, former lifeguard and water authority,  John R. Kukeakalani Clark, shared information about the coastal sites near the Outrigger Canoe Club with OCC members at a Historical Committee Presents event.  The information came from his book, Hawaii Places: Names, Shores, Beaches and Surf which was published by the University of Hawaii Press.

This site was first surfed regularly by Albert “Oscar” Teller (1909-1995).  He came to Hawaii in 1932 and learned to surf in Waikiki. A body builder, with an excellent physique, the beach boys immediately named him “Oscar” after the statuette given out for the Academy Awards in Hollywood, and that was the name he used for the rest of his life.

In 1958, Teller moved into a cottage behind the Sans Souci condominium and started surfing Old Man’s.  During the early 1960s, Ralph Sallee and Floyd Bendickson, two younger friends who surfed with him, began calling the site Old Man’s after Teller and the name stuck.

Teller surfed here regularly until 1984 when he finally stopped surfing at the age of 75.  His ashes were scattered at Old Man’s in 1995.

This popular site was named for Rudy Tongg, an island businessman, who had a Diamond Head beach front home from 1946 to 1961.  His sons Michael and Ronnie were avid surfers and their home was the focal point for the neighborhood surfing community.

Castles was named for the home of Samuel Northrup Castle who arrived in Hawaii with the eighth company of missionaries in 1837.  He left the mission in 1851, and with Amos Cooke, founded Castle & Cooke Company.

The Castle family’s three story beach front home, Kainalu, was a prominent landmark in Waikiki and the landmark for the take off at Castles.  It was razed in 1958 for the construction of the Elks Club.  The property is also home to the Outrigger Canoe Club which was built on the site in 1963.  Castles is the south shore’s most famous big wave surf site.  The second reef site does not break unless wave heights are 10-feet or greater.

In 1930, Duke Kahanamoku caught a now legendary wave at Castles and rode it standing all the way to Waikiki Beach.  This spot is also known as Kalehuawehe.

Castles was also called Blue Birds and Steamer Lane by some.  However, these were not actually Castles.  Blue Birds is to the west of Castles, outside of Techniques, and it forms only on a special, more westerly swell.  That’s the spot that Duke Kahanamoku named Papa Nui.

When Duke made his famous ride from Castles to Canoes, he was riding a 16-foot long skegless redwood board.  To make that ride, the angle of his slide would have been important, especially to get from Castles past Cunha’s.  That in between section is Techniques, and it’s a difficult section to get through.  You had to have good technique to make it, especially on the old boards.

Steamer Lane was a term that was used to describe Waikiki when it was breaking at its biggest, as in, “We have a Steamer Lane swell today.”  It happened when the lineup put you so far offshore that you were in the shipping lanes used by the former interisland steamers.  But it wasn’t one specific site.  In the years that followed Duke’s ride, there was talk among surfers, if he really did it or not,  if anyone could actually ride a wave from Castles to Canoes.  This talk bothered Downing, and he wanted to prove to himself that the Duke could have done it.

“In the early 1950s, I was out at Castles on a big day, but using a smaller board, a 10-foot balsa/redwood with a skeg,” Downing told Clark.  I made the ride three times from Castles to Canoes.  In fact, I ended up past Canoes, inside of Populars, and there’s no doubt in my mind that I could have made the Halekulani Hotel.  But out of respect for the Duke’s ride, I never went ashore.  The Duke was something special, and I tried to be respectful of his image and what he did.

“I proved to myself that it could be done, and that if the Duke said he did it, he did it.  The smaller board took a lot of maneuvering, compared to Duke’s 16-foot board, which had a lot of glide, and the paddle back out between waves took at least 45 minutes.  During the rides I remember thinking, ‘alright, I’m still going”, and at the end of each ride, I was always amazed that I had ridden so far.

“Castles on a big day is a massive wave.  The current is strong, and it’s so hard to line up that lots of waves come through unridden.  You drift quickly and really have to watch your markers.  The big sets usually clean everyone out.

“To make that ride to Canoes takes a special wave, the more from the south, the better, and it is probably one of the longest waves in the world.  The ride takes you from one end of Waikiki Bay to the other.  From Castles it’s the same wave, one long swell, and you go through section after section.  Each section has a peak, and you have to turn down into the peak and then accelerate forward.  All of the riding is done outside of the regular spots, like Publics and Cunhas.”

June 1995 was the last time Downing surfed at Castles and the swell then lasted three days.  “I had a pair of binoculars and from the beach I counted over 500 people in the water from Castles to Populars.  This is what makes Waikiki so unique with so many sites in one bay, in one place.  When we get a gigantic swell, the wave train breaks outside and regenerates itself inside in many different spots.  These are the waves that produce lots of good memories that live in your mind forever.”