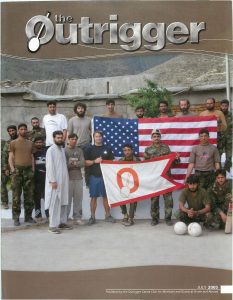 This American Flag was donated to the Outrigger Canoe Club by a young Navy SEAL on duty in Afghanistan. He was a guest at the OCC during leave from a long, arduous deployment. The flag was flown by American fighting men upholding the cause of freedom. When the Club received the flag it flew over the Club on the 4th of July in 2005 and then was showcased in a frame and hung in the Ka Mo`i Boathouse so members may long remember the sacrifice our military makes for us.