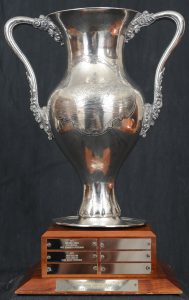 Etching of a canoe surfing on a wave.

This is one of the two oldest trophy in the Outrigger Canoe Club Trophy Collection and has quite a story behind it.

The story starts in 1908, a few months after the Outrigger Canoe Club was founded.  After getting the Club going, founder Alexander Hume Ford got on a ship to the Mainland on December 8, 1908 for a promotional tour in Canada and the Mainland U.S. to spread word of the wonders of Hawaiian water sports.  During his tour, Ford contacted a cruise line whose ships would be making two stops in Hawaii early in 1910.  He proposed a surfboard contest and canoe races at the OCC.  Frank C. Clark, agent for the cruise line, was so enthusiastic he agreed to donate four silver cups as prizes.  The Clark Cups were to be the first trophies ever awarded at an Outrigger water sports contest.

“I have just received a very pleasant call from Mr. Alexander Hume Ford, president of the Outrigger Canoe Club who tells me he is arranging a surfboard contest and outrigger canoe races at Waikiki in honor of my 700 passengers of each cruise of the Arabie, to take place on the afternoon of the first day of the arrival of each cruise, namely, January 23 and February 12, 1910.  I want to donate two silver cups for each cruise, making four cups in all, to be engraved:  Donation from F. C. Clark to the Canoe Club and ditto to the Surf Board Club. S.S. Arabie Cruise 1910.

The jeweler told the Pacific Commercial Advertiser newspaper that Mr. Clark “would like a picture of a man standing on a surfboard and one of a man in a canoe to be engraved on these cups.  The designs for same will be selected at the next meeting of the officers of the OCC.  These cups are to be 12 inches high, with two handles each, mounted on an ebony base, and will form a beautiful present.”

The finished cups were proudly displayed in the window of the jeweler on Fort Street for all to see.  When asked about the upcoming events, an official of the Outrigger Canoe Club was quoted in the newspaper as saying it “knew absolutely nothing about the cups.  We have never been notified in any way what they are for, when they are to be raced for, or what the conditions of the gift are.  We understand that Mr. Ford arranged for the cups to be given by the Clark people.  But he has not written to me on the subject, nor, so far as I can make out, to anybody else who is an officer of the Club.

“If the Club is expected to get up a regatta for the entertainment of visitors, it is certain capable of doing it. Anything we have gone into so far has always been a success.  But we must certainly know something about what we are expected to do.  Nobody seems to know where Mr. Ford is, or when he will return.”

It was later determined that the Club would give an exhibition of surf riding and canoeing when the ship arrives.  “Nothing more than what they do every day for fun and the winner in each contest will receive as a prize, a cup, such as is very seldom seen in Honolulu,” a Club spokesperson was quoted as saying.

On January 12, 1910, 13 days before the ship was due to arrive, an article appeared in the Pacific Commercial Advertiser saying that “judges will watch the surfboards from the end of the Moana pier and select the half dozen best riders for a final competition for the Clark Cup.  The judges will give one of the Clark cups to the boys who bring their canoes furthest toward the beach in a straight line before an advancing wave.  Several attempts will be made by each canoe so that the judges may be enabled to give a fair decision and the most expert canoeists will win.

Well the big day arrived, January 24, 1910 and there was no surf for the contest.  Three girls, Josephine Pratt, Ruth Soper and Carole Lowe gave a surfing demonstration on some small bumps to the 700 passengers.  It was impossible to award the Clark cups so it was decided that the four cups would would be competed for later on, probably when the return excursion arrived back in Hawaii.

On February 12, 1910, the excursionists were back in Honolulu and everyone was hoping for some surf this time around.  Again, the Clark Cup surfing events were postponed due to lack of surf.

On June 10, 1910 The Clark Cup races were rescheduled as part of Regatta Day.  A newspaper article that day, stated” The Clark Cups will be awarded and their record begun, for on the four immense silver trophies will be engraved the name of those Outrigger members who show themselves most expert as surfers.  On one of the big tankards will be engraved the name of the best girl surfer in these islands–and the world; on another name of the most expert boy surfboard rider; on the third cup will go the name of the small boy who shows the greatest skill in bringing his canoe in before the rollers, and on the fourth the name of the young man who most skilfully and fearlessly handles one of the large canoes in the big surf.”

The next day, the Pacific Commercial Advertiser stated:

“The surfing contest was the aquatic event which concluded the afternoon’s sports.  Miss Josephine Pratt being the only winner of a trophy.  Miss Pratt and Carroll Lowe were the only girls to compete in this thrilling event and although they went far out beyond where the big rollers form, they could be distinguished by the color of their bathing suits.  Miss Pratt wore dark blue and Miss Lowe bright red.  Both showed remarkable skill in riding the big waves on the surf boards but Miss Pratt made the longest standing ride, catching a huge wave and staying with it almost to the shore.  When it broke all around her she seemed to be swallowed up in the foam, but held her balance despite the furious rush of the wave and stood erect throughout the whole course of her flight.  There were nine entries for the boy’s trophy in the surfing contest, but Col J. H. Sopher, who acted as judge of the events was unable to distinguish the contestants from the shore and there were no judges’ boat provided, so that Miss Pratt was the only one of be awarded the Clark Cup.  The Boys’ contest, Mr. Ford said, would be repeated at some later date.”

Outrigger again scheduled a surfing contest in November 1917 as part of its Thanksgiving weekend of aquatic events.  Josephine Pratt, now married and living on Maui, returned the cup to the OCC to be used as a perpetual trophy for the women’s surfing event.

November 30, 1917 was a beautiful day and the “waves at Queen’s surf were above their usual standard as to size and force,” according to the Pacific Commercial Advertiser.  “The contest for boys under 16 was the first of the number to be pulled off and was undoubtedly the best of the lot.  Some dandy surf stunts were shown by the youngsters, and the stunts that required clever balancing showed the surfers’ skill to the utmost.  A silver cup went to the winner, Ernest Cook, who has also come out the best in several of the other competitions, composed of swimming races.  Edwin Peterson lost out by one point to Cook.

“Miss Josephine Hopkins, who is also a renowned swimmer of late in the recent regattas, came out first in the ladies’ surfboard contest, easily taking the honors over her many competitors.  The winner of this contest also gets a silver cup, but unlike the boys’ cup cannot be kept by the winner but can only have the honor of having her name engraved upon it and it contested for again by other women members of the Club.”

There is no mention of the Clark Cups after this race.  The one for large canoe surfing, remains with the Club’s Historical Committee and was repurposed in 1974 as a trophy for canoe surfing.  There is no record that the trophy for best amateur surfer in a small canoe was ever awarded, and its location remains unknown.

Over the years, the girls surfing trophy was exhibited, borrowed, and slid away, forgotten.  In 2002 Past President and Historical Committee member Ward Russell discovered the trophy on another island in the benevolent care of descendants of Josephine Hopkins Garner, the 1917 winner.  By the gracious transmittal of Allen Garner, the trophy is now back at the Outrigger Canoe Club, where it perpetuates the Hawaiian sport of surfing.

The cup was recycled in 1974 and awarded to the winner of the OCC Annual Canoe Surfing Championship as a perpetual trophy.  Winners for the years 1974 and 1975 are listed on the trophy.