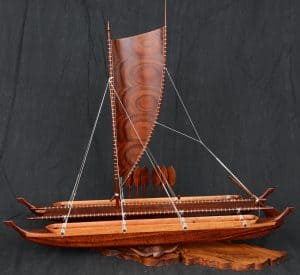 This beautiful koa sailing canoe was a gift to the Outrigger Canoe Club in 2010 from Domie Gose, OCC’s maintenance supervisor and long-time employee, who became a master craftsman after decades of refining and building canoes of all sizes, crafting paddles and other beautiful works of art, all out of rare koa wood.

“I’ve been blessed to work at the Outrigger Canoe Club for 38 years,” Domie said, “and I wanted to give something back to the members who have been so wonderful to me over the years.”

Past Club President Karl Heyer IV acquired a koa log on the Big Island and gave it to Domie to craft the model, based on a photo he saw of an Ali`i warrior canoe. The log was three feet long, with a thickness of 2.5 feet and was five inches wide.

After 150 hours of cutting, shaping, grinding, chiseling, sanding and finishing, many with home-made hand tools he designed, a sleek sailing canoe emerged from the log, complete with sails and paddles. The canoe rests on a koa base resembling the island of Oahu with a koa honu (turtle) representing the members of the OCC.

Domie, who smiles while he works, says he dreamt about the canoe and would wake up in the middle of the night with inspirations. He was always trying to design a new technique that would shorten the crafting time.  The koa sails on the canoe are spectacular. They are made from curly koa and the wood grain is exquisite. “The grain of the wood inspires you and speaks to you about how you’re going to make the canoe,” Domie added.

After presenting the finished canoe to the Board of Directors, Controller Gordon Smith and Domie asked Kawika Grant for a name for the canoe.  “As I always do since Cline Mann isn’t around for guidance, I agonized over this one wanting the name to be just right,” Kawika said. “One day after parking my car, I walked into the Club via the front entrance instead of along the volleyball court. Looking up through the trees before I got to the front door I looked for our tern in the plumeria tree. That was when the name came to me. A sea bird would be most appropriate for a sailing canoe’s name. Why not our very own sea bird, one that has blessed us year after year with its presence at our front door.”  And thus the canoe was named Manu o Ku… the white or fairy tern.