You are here: Home / OCC Archives / Waiwai Collection (Trophies and Na Mea) / The Thing To Do With Life Is Live It! by Norman Rockwell

With an ad agent and Pan Am photographer in tow, Rockwell was put on a plane and sent eastward around the world between August and October, stopping in every city along the way and sketching what he did best – people – setting them like jewels in the framework of their unique surroundings.

Rockwell’s last stop was Honolulu where he spent the last week of October at the Surfrider Hotel, just steps away from the Outrigger Canoe Club. This arrangement could not have been more propitious.  The artist was warmly received by the Club as an honored guest through the good graces of Pan American and its ‘alumni’ group called the Bourbon League, with whom OCC has enjoyed a close and cordial relationship since their startup of trans-Pacific Clipper service in the 1930s.

Pan Am pilots, maintenance staff and flight attendants were extended Club hospitality during their lay-over rest stops next door at the Royal Hawaiian Hotel under a special nonresident membership arrangement; this in gratitude for the company’s loyal support of the Club and facilities. Among many things, it was Pan Am employees who singlehandedly kept the volleyball program going full tilt throughout the war, flying in a steady supply of balls and nets otherwise unobtainable locally.

Once settled in, Rockwell was introduced to the Club’s Hawaiian water sports and was immediately captivated by the board and canoe surfing, which he promptly zeroed in on as the potential subjects of his sketches.  Rockwell preferred to do his painting from photographs, where he could pose his models exactly the way he wanted them, then work from the photos on the final painting at his own pace. He didn’t try board surfing but did have photos taken of a model, including himself, teetering precariously on a surfboard on an imaginary wave, the board planted firmly on the sand in front of the Club.  He did go out for a canoe ride, however, took pictures of Diamond Head across the water and other canoes riding in on waves, and this experience became the subject he ultimately decided to paint.

The Club’s Beach Services set up a canoe for him on the beach – the Mō‘ī li‘i or Little King, a smaller cousin of The King, Ka Mō‘ī, the much larger surfing canoe now hanging in the Ka Mo`i Boathouse. Rockwell did not photograph the six people in the canoe together but posed and shot each one individually, one seat at a time. Separate models were used for the tourist couple in seats four and five, but he used the same beach boy for the four paddlers in seats one, two, three and six. That Club beach boy was Sam “Steamboat” Mokuahi Jr. And the rest, folks, as they say, is history.  (see photo below)

Of all the many sketches Rockwell made for Pan American on his round-the-world sojourn, only four were ever used in ads. As luck would have it, the very last, and very best, was published in the spring of 1956, in numerous magazines including the Saturday Evening Post, Life, and Holiday.

A color slide of the original painting resides in the Club archives and, on the initiative of the Historical Committee, it has been digitally enlarged to a 24 inches x 57 inches print-on-canvas for display in the Club from time to time for all members and guests to see and enjoy.  The painting was rematted and reframed in 2020.

Look for it. It will be hard to miss, and like all Norman Rockwell paintings, hard to resist smiling at… and looking back… and remembering

These photos were taken by Rockwell while at the Outrigger Canoe Club to develop his illustration. 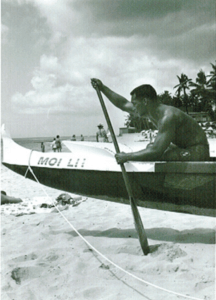 Photo shows the position of the paddler in seats one and three of the canoe. 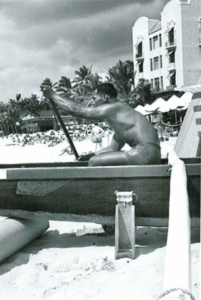 Photo two shows the position of the paddler in seat two (note he’s paddling on the right side.) 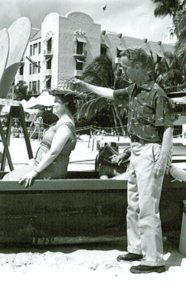 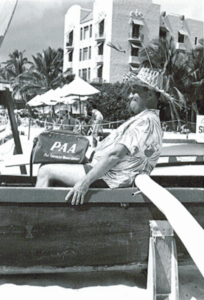 The male tourist in seat five. 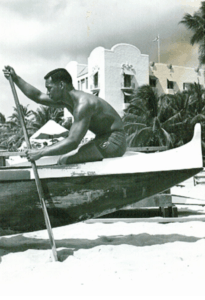 The steersman in seat six. 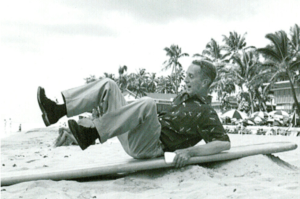 Rockwell having fun on a surfboard on the beach.