Twenty-seventeen marked the 50th anniversary of the Winged “O”s – an honor society of athletes who have contributed to the Club in their primary sports and to the Club’s sports programs in a significant way.

In 1968 Wally Young, one of the first eight inductees, took the lead in designing and crafting a Winged “O” Roll of Honor plaque complete with photos. It was a round slice of a koa log with a live edge of bark left in place to give it a rustic, down home appearance.

This Winged “O” plaque graced the OCC Lobby for the next 34 years, adding new members to the illustrious company of Duke Kahanamoku and Dad Center until 2002 when all the available space was finally exhausted. An attempt to place new honorees on smaller satellite log slices proved to be unsatisfactory. Attempts to double the original log by slicing it into two pieces and opening them up like matching butterfly wings had to be abandoned when lumber mills as far away as the Big Island could not slice the log because of its thinness. The impasse was literally hanging on the wall. The plaque would have to be replaced.

To the Winged “O”‘s rescue came OCC member and master woodworker Jay Dowsett, who donated the wood and his labor gratis to shape and finish a beautiful square piece of primavera wood, complete with live edge. If it couldn’t be the old round slice of koa, at least it would have an echo from it.  The new plaque, complete with new photos and reassembled by the master craftsmen of our maintenance staff, was newly installed in its place of honor in the Lobby on February 1, 2017, just in time for this year’s annual membership meeting, and the induction of the newest member into the Winged “O”.

Volleyball legend Dave Shoji became the 51st honoree and a great new addition to kick off the second half-century of excellence in sports by the athletes of Outrigger Canoe Club.

This award was established in 1967 to pay high tribute to those who through the years have given unselfishly of their prowess, time and loyalty, in the effort to expand the Club’s illustrious athletic image and to continue its reputation for victory. These individuals have made outstanding contributions both on the fields of competition and in the equally important role of team and athletic program support. 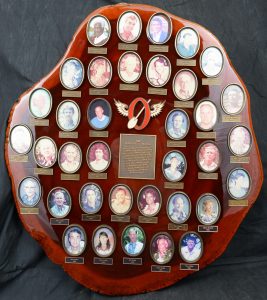 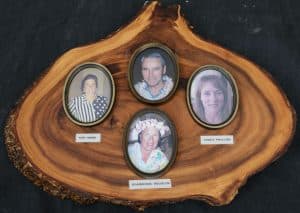