Cline Mann, inventor, creator and custodian of Corinthian Corner (the Ewa/Makai corner of the Hau Terrace wall), joined the Outrigger Canoe Club in April 1938. The Outrigger has been blessed many times over by his participation, guidance, talent and love for the Club.

Cline was a part-Hawaiian island boy born on January 11, 1923. He was educated at Punahou School, Class of 1941, where he was captain of the swimming team. Then he was off to the mainland to Dartmouth College where he swam freestyle and backstroke events, graduating in 1944 with a degree in civil engineering.

After a year as an Ensign in the Navy in Rhode Island, he returned to Honolulu in January 1946, returning to the Mainland only twice after that for his 50th Dartmouth reunion and to the wedding of a friend.

Water sports were Cline’s forte. He was the Club Champion in the Sunfish and Scorpion sailing categories, having become a sailor only after the Club’s move to its present site. He is probably best known for passing on his sailing skills to a multitude of younger members, some of them now champions. He served as Commodore of the OCC Sailing Club.

Cline was a helper on dozens of Molokai to Oahu canoe races, beginning in 1960. His help in designing change charts and other support was invaluable to our crews.

As our Club President in 1964, Cline saw the Club through the growing pains of transition between the new and old clubs after chairing both the Planning and the Building committees. During the three previous years Cline paid his dues as a committee member spending many hours on the Sailing, Volleyball, Canoe Racing, Building and Grounds, and Admissions committees.

During a period of five years as a Director, he rose to the Presidency through the offices of Secretary and Vice President. Most presidents retire after their time in office, but not Cline Mann. He went on to serve as Club Captain from 1965 to 1967 and for a period of eight years represented the Club in the Hawaiian Canoe Racing Association.

Cline was the first to admit that he never paddled a canoe in a race.

He was fond of the fact that during his administration the Outrigger sent a young but very good volleyball team to the Nationals despite the fact that many of our noted players were still playing with the Central YMCA team, and we have sent a team nearly every year since.

After several years off the Board of Directors, Cline returned for another five years serving as Assistant Treasurer and Assistant Secretary. 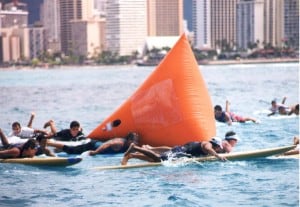 In the 1960s, Cline had two 13-foot balsa paddleboards made to be used in the Lanai to Maui Paddleboard Race. Over the years these boards were loaned to paddlers for paddleboard races.

The prominent race in the early days was the Christmas Day Paddleboard Race, held on an off-day during the Makaha Surfing Championships. When the race was dropped by its sponsor, Cline found a new sponsor and ran the race himself. With others, he established the criteria for the new class of stock paddleboards: 12-feet in length and 20 pounds, with no mechanical rudder. Cline’s idea was to enable more paddlers to participate by offering a board that did not have the advantage because it was made from costly materials. This kept the sport fair for many years. As new materials became more affordable decades later, lighter boards entered the arena. It took convincing but Cline eventually allowed the lighter boards into the OCC races. His fear was that all the older records would be wiped out with the lighter, faster boards.

Cline was on the Paddleboard Committee for more than two decades. He started many races, was the official timer and passed out the trophies. At Cline’s behest and with his leadership, the Outrigger began sponsoring three paddleboard races a year: a 10,000-meter race starting in December 1978, a 10,000-meter race starting in August 1979 and a summer surf race that began in June 1981.

In 1985, the Paddleboard Committee renamed the summer race in Cline’s honor, the Cline Mann 5,000-meter Paddleboard Race, and reduced the distance to 5,000-meters. “Cline Mann has contributed so much to the sport of paddleboard racing that the Paddleboard Committee wanted to thank him for all his effort, so we decided to name the race after him,” said committee chair and fellow Winged “O” Karl Heyer IV. One of the great mysteries of life for the very surprised Cline was how the committee could have pulled it off without his finding out until it was time to award the trophy. Of course if he had found out, he would have squelched the idea. A shy man, he preferred to work in the background and shunned publicity. The beautiful perpetual koa trophy for the Cline Mann Race was designed by Sean McKibbin.

A surveyor by training, Cline was always precise when he went out on the Boston Whaler to set the course each race day. As paddlers waited on the beach for the start, he’d take his time setting the buoys to make sure the race course was exact. He often grumbled that other race organizers weren’t as precise in course measurements and you couldn’t count on the distance being the advertised distance.

His pre-race briefings were legendary as he drew the race course on a chalk board, and there was the mandatory photo of all participants with their paddleboards on the beach at the start of the race. At the finish line, Cline would stand in the water and signal each paddler in, yelling his/her number to the timers.

Cline particularly enjoyed watching the younger OCC members compete in the race, many of whom he had sponsored into the Club. In 1998, a children’s event was added to the Cline Mann race. The 500-meter race was added to introduce the sport to youngsters. A special Cline Mann Junior Champion trophy was created for the race.

Cline was a walking encyclopedia of facts, names and dates about the Club. If you wanted to know more about the Club, or who a person was on the Terrace or on the beach, you could catch Cline every weekend on the Terrace enjoying his lunch of lau lau and poi, a Budweiser always in his hand, or most evenings in the bar and ask your questions.

Cline’s proudest invention was the OCC Canoe Trainer, Kekumuhoe`ana. He dreamed of a way for the canoe racing coaches to teach novice paddlers stroke, technique and timing in a safe, calm environment, without fighting the ocean, wind and currents. He designed the trainer and with the help of Winged “O” Mike Holmes built the trainer out of marine plywood and fiberglass. He figured out how to overcome all the obstacles of paddling in a tank of water, and the trainer has been used by the Club’s paddlers since 1971.

Cline passed away on September 16, 1996. After his death, the Canoe Racing Committee named a new four-seat fiberglass surfing canoe Cline after him.

Cline was another who exceeded the criteria of a Winged “O” and gave his all to the Club he called home for more than half a century.