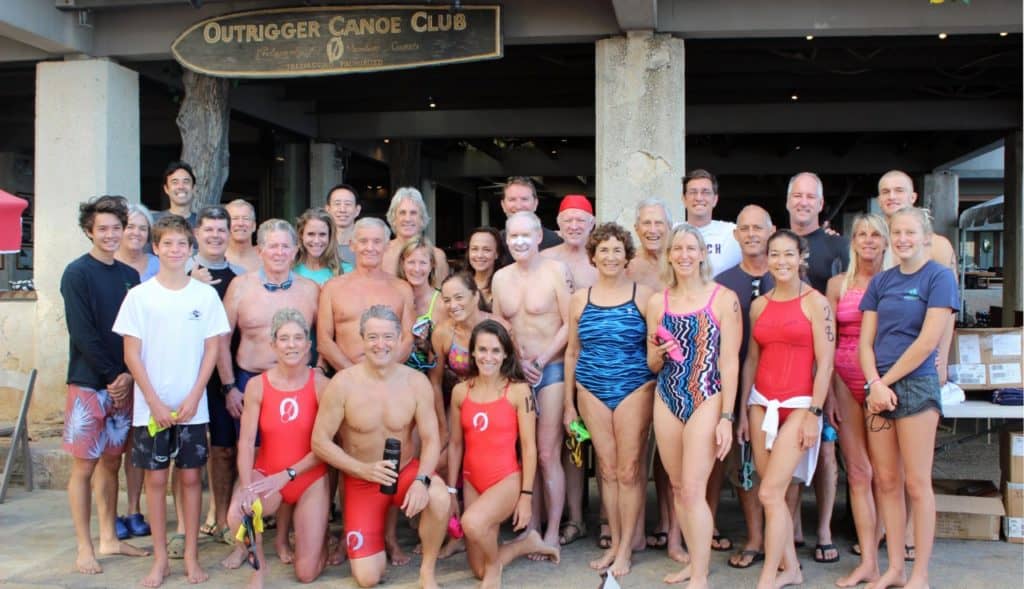 Outrigger Canoe Club was a premiere swimming club in its early history with many Olympic and AAU champions among its members.  So it isn’t surprising that the oldest competitive event that the Club sponsored and continues to sponsor was in swimming.  The Castle Swim, first held in 1917, was part of a month-long aquatic carnival that the Club sponsored.  There was surfboard competition, canoe races, and various swimming contests.

The driving force behind the water carnival was W. S. Beach who took the initiative in promoting the carnival. Beach came to Waikiki in 1915 and was an enthusiastic swimmer and patron of all aquatic sports.  He believed that the only way to discover the talent possessed by the Outrigger members would be to hold a water carnival in which all the members would be able to enter and compete.  With the help of Club Captain “Dad” Center, the carnival became reality.

The swim was revived in 1922, as the blue ribbon event of the Club’s Thanksgiving Day roughwater swims which featured six swimming events: the Harold Castle Swim for Men, the Star Bulletin Cup Swim for Girls, the Alexander Hume Ford Cup for Novice Girls, the Dawkins Benny Cup for Boys Under 18, the Boys Under 16 Race and the Men Over 30 race.  The Thanksgiving Day swims were for Club members only.

Interest in competitive swimming was waning in the early 1930s at the OCC and the event was taken over by the University of Hawaii in 1934 and became an open swim. For the first time the Castle Swim was won by a non-member.  In 1952, with Toots Minvielle serving as chair of the OCC Swimming Committee, and Dad Center, as advisor, members began urging the Club to restart the Castle Swim, but it wasn’t until 1953 that the swim happened. The event was again held in 1955 and 1956.  The Castle Swim was cancelled in 1957 due to lack of interest from swimmers.  There was an attempt at a revival in 1960 but it failed.  Another revival attempt was made in 1973.

In 1975, the OCC Swim Committee chaired by Gerry DeBenedetti with members Cline Mann and Fred Hemmings Jr., put on what they called the “Second Annual Revival of the Castle Swim” on the Sunday after Thanksgiving. It was a race for members only, with a change of course.  Now members would swim from the old Club site in Waikiki, to the present Club site at Diamond Head, a basic reversal of the original 1.25 mile course.  And instead of different events, the Castle Swim was to be one distance, with prizes to the first place winners in age categories every five years.

Nineteen members entered the Castle Swim in 1975 and it has been held every year since on the Sunday after Thanksgiving.

Teenager Kristi Torkildson was a perennial women’s winner.  She captured the race from 2003-2006.

History of the Castle Swim